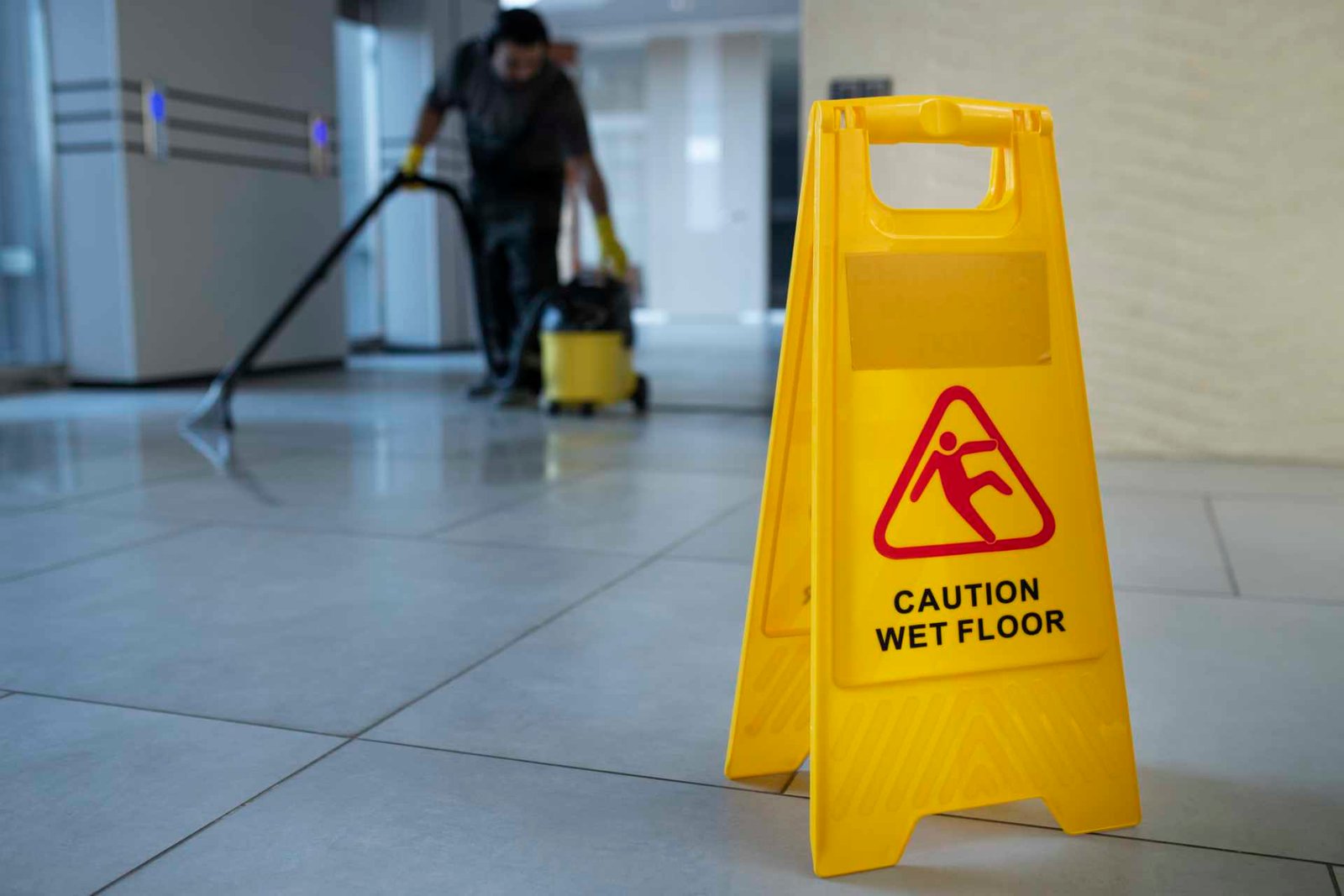 20 Apr Slips and Trips in the workplace: How cleaning activities are the cause and the remedy

Through our years of experience in both expert witness and case preparation work (advisory work on the viability of a case or claim) and practical industrial cleaning, we have distilled that knowledge into an advisory service available to facility managers/facility owners/cleaner managers/health and safety managers. We can identify the risks (even the ones that are not obvious, the proper risk management of slips in the workplace and public areas and the actions you need to take to mitigate those risks.

In the not so distant past slipping or tripping up was seen as a comedy act, in fact it was the staple material of many film comedies, and of course any injuries pertaining from the incident were simply a bruised ego. That is not to say that the general public cannot distinguish between comedy and real life; slips and trip incidences in real life cause real injuries and real fatalities.

Yet slips are still not taken as one of the major safety issues in the workplace and in public spaces, and anecdotally people consider slips and trips to be rather benign. It is only when confronted with evidence that slips account for approximately 900,000 NHS bed-nights, compared with 82,000 from car accidents in 2003 (Beaumont et al, 2004). Statistically, slip incidences represent the most common safety risk to all.

Evidence compiled by the Health and Safety Executive (HSE) indicates that slips and trips are the most common cause of major injuries in the workplace, as defined in the RIDDOR (Reporting of Injuries, Diseases and Dangerous Occurrences Regulations 1995). Not only that they occur in all workplaces, some industry sectors like hospitality and the service sectors fair worse, and of those incidences about 95% result in broken bones. Slips and trips can also be the initiation or the cause of subsequent injuries, such as falling from a height or down stairs initiated by a slip; about 30% of reported major injuries are from an initial slip or trip.

This translates to every 3 minutes a slip, fall or trip incident occurs and on average the total cost to the economy is £800 million pounds. A significant proportion of that cost is attributed to businesses in:

One of the biggest problems with these statistics is the lack of detailed data and reporting when these incidences are reported. There is also the factor that many incidences don’t get reported in the first place, or are dismissed as freak events. So, the real financial costs and human costs are estimated to be much higher.

What this shows is that the causes of slips and trips are (Peebles et al, 2005):

There are many causal factors that contribute to causing a slip or a trip, but often at the scene of an incident there are usual more than one factor in play. For example, splashes of liquid could be absorbed into the person’s clothing after a slip and that crucial bit evidence is missed when trying to investigate the cause of the incident – If the incident is ever investigated.

In recent years, slips and trip incidences have been studied and key research undertaken to the causal nature of these incidences. In an attempt to understand the mechanism of a slip, researchers have studied the physiology of walking – how the body moves forwards relying on friction between the heel or toes and the floor, at key stages of the walking cycle. Research lead by the Health and Safety Laboratory (HSL) studied the mechanics or the forces applied at the moment the heel makes contact with the floor, further to this the external factors affecting the slip resistance were also studied and modelled. Other studies (Peebles et al 2005) looked at the role human factors played in a sample of 62 slip or trip incidences from a variety of industries and found a substantive lack of awareness and understanding of the risks. They found a systemic failure in communication between staff and management regarding the risks and a serious lack of a “joined up” approach to investigation, recording, monitoring and rectifying those incidences.